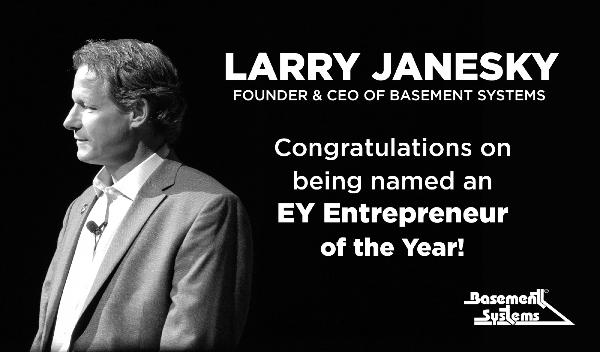 Larry Janesky, CEO and founder of Basement Systems Inc., has been named Ernst & Young's Entrepreneur of the Year for his innovative work in the home improvement industry and his unique ability to help other entrepreneurs achieve success.

Janesky received the award this month at the New York EY Entrepreneur of The Year gala at the Marriott Marquis. He had been selected as a finalist from among hundreds of candidates in the region and said he was proud of the work he and his company are performing.

Janesky founded Basement Systems, known as the All Things Basementy company, in 1987 as a provider of basement waterproofing solutions and, since then, it has expanded to become the parent company to more than 400 dealers in the U.S., Canada, Mexico and the United Kingdom. The company now operates five divisions.

Back to Previous Page
Back to News & Events