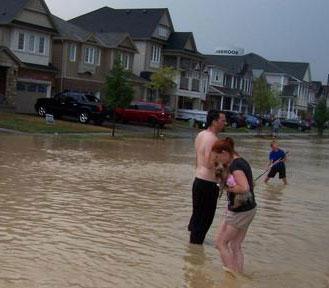 On Monday evening, the Greater Binbrook Area received an onslaught of torrential downpours adding up to as much as 140 mm of rain in some areas in less than four hours. It was reported that twice as much rain fell in four hours than in the entire month of June. The Red Hill Creek rose substantially and led to an eventual washout. The flooding was so bad that officials had to close off roads including Binbrook, TrinityChurch and Airport. The distress does not end there for the citizens of Binbrook – it was reported that over 100 basements were flooded, particularly in the Binbrook and Ward 9 areas.

From what recent history has shown, the problem of immense amounts of rain coming in a short amount of time is not going away any time soon. With all the flooding in basements and crawl spaces that has been caused by these downpours, an effective solution needs to be reached. The workers for Omni Basement Systems offer such a solution. They are dedicated to their customer’s needs. Winning the HomeStars Best of 2011 in Hamilton for the waterproofing category just goes to show that their services are high quality. If you are one of the many people who have had basements or crawl spaces affected by these storms, call Omni Basement Systems.

Back to Previous Page
Back to News & Events