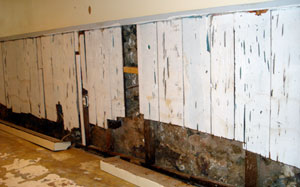 Mildew and mould both belong to the larger family of fungi that includes mushrooms. Mould tends to grow on old food and building materials, while mildew favors fabrics, paper and shower curtains. Just as some mushrooms contain poisonous compounds, some types of mould contain “mycotoxins” that can cause health problems (more on this later).

It's easier to understand household mould problems once you realize that mould is similar to a virus that can spread through the air when someone sneezes. Mould also spreads through the air --by means of microscopic spores. These tiny organisms are expelled by an established mould colony and travel through the air in order to start new colonies where favorable conditions are present.

A virus seeks out a living host, but mould looks for dead cellulose. There's plenty of dead cellulose in our houses –wood and wood products, cloth made from cotton and other organic material, and paper in just about any form. The reason we don't see mould everywhere is that this organism won't take hold on “host” materials unless moisture is present, and mould doesn't like direct sunlight. That's why mould is most likely to be found in dark, damp areas like basements and crawl spaces.

Just as we can't hope to wipe out every virus, it's not possible to eliminate mould. (Some mould has lifesaving capabilities –like penicillin, for example.) But it's definitely smart to wage war on mould in your home. Here's why:

Avoid a health hazard. According to the Center for Disease Control, it's important to reduce exposure to mould in order to reduce the incidence of the allergic reactions and respiratory ailments that mould is known to cause.

Maximize useful space in your home. The basement can provide valuable extra space in a house, but a mould infestation can make this space unusable. Since it costs about twice as much to build an addition as it does to finish the basement, many homeowners find that it's worthwhile to solve basement moisture and problems and eliminate mould infestations.

Preserve property value. Homeowners and real estate agents are legally obligated to disclose mould problems when selling a property. Many prospective buyers will insist on expensive mould remediation or simply look for another property where mould isn't an issue.

Avoid costly repairs. It's expensive to tear out rotted lumber, mould-stained wallboard and other mould damage, and complete these repairs with new materials. By waterproofing and dehumidifying your basement and/or crawlspace, you can create the dry environment that will discourage mould development.

Take advantage of new materials. Manufacturers of building materials and innovative companies like Basement Systems have developed mould-resistant products like paperless drywall, waterproof plastic flooring tile, composite molding, and rigid foam insulation. Finishing your basement with these materials eliminates the food source that mould requires, which (in addition to reducing moisture levels) makes it extra difficult for mould to take hold. mould-resistant materials are also recommended for use in moist areas like bathrooms, kitchens and laundry rooms.